Las Vegas has plenty of opportunities to indulge in extravagant gourmet meals from some of the world’s best chefs, but if that’s not in your budget, don’t worry.

We’ve come up with a list of 17 Las Vegas restaurants where you can enjoy a great meal for under . There’s everything from Greek cuisine to Korean barbecue to pizza and even bites from Gordon Ramsay that won’t break the bank.

Here are the best places for cheap eats in Las Vegas:

Estiatorio Milos at the Cosmopolitan offers a great way to taste several dishes at a great price. The lunch special is a three-course, fixed-price menu served within 45 minutes of ordering.

The popular special is and features a choice of appetizer, main course and dessert. Appetizer selections include Mediterranean octopus, Maryland lump crab cake and a Greek mezze plate. For the main course, choices include organic salmon, grain-fed chicken breast skewer and shrimp saganaki. Try real Greek yogurt for dessert. Note: There are additional upcharges on some items like the octopus. 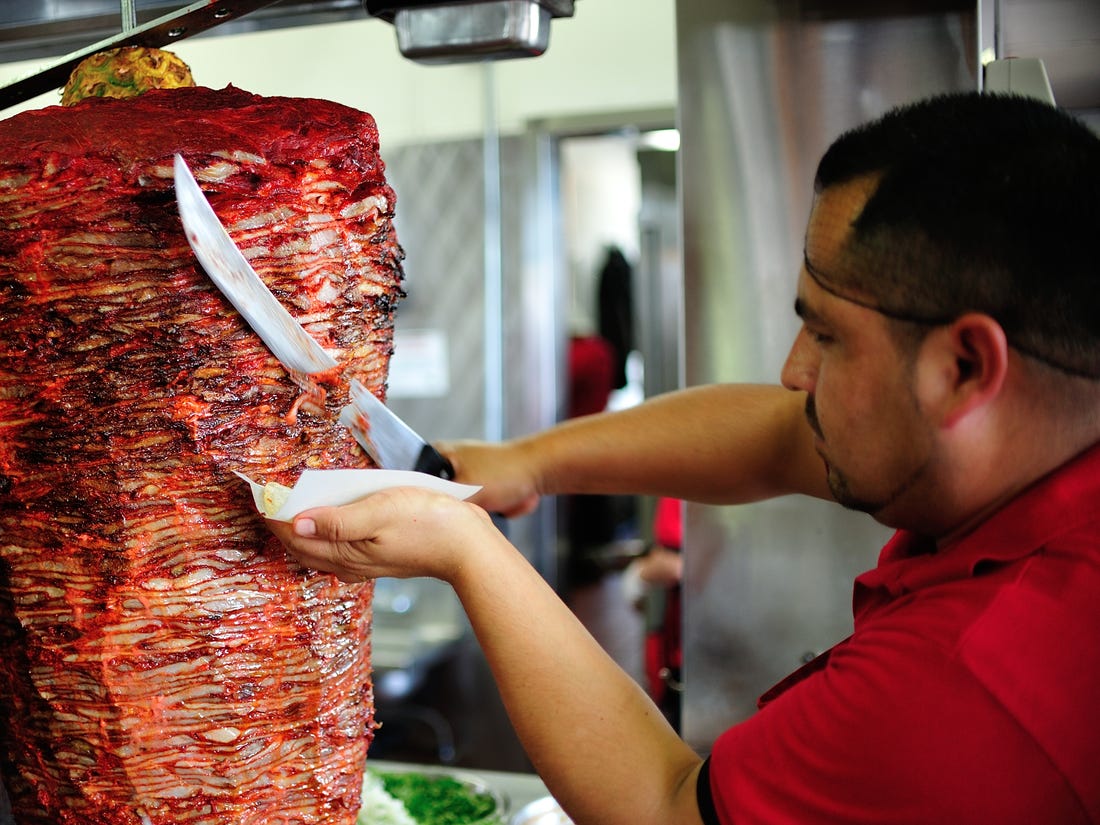 Tacos El Gordo is a family owned and operated taco shop that started in Tijuana more than 40 years ago and has been in Las Vegas since 2010. There are three locations in town serving tacos with handmade corn tortillas, high quality meats and guacamole and salsas made from scratch daily.

Tacos cost around .60 – .80 apiece and choices include carne asada, chorizo, lengua and more.

The most popular is the adobada, made with spicy-sweet pork topped with cilantro, onions, a sweet white sauce and other choices including fresh pineapple. 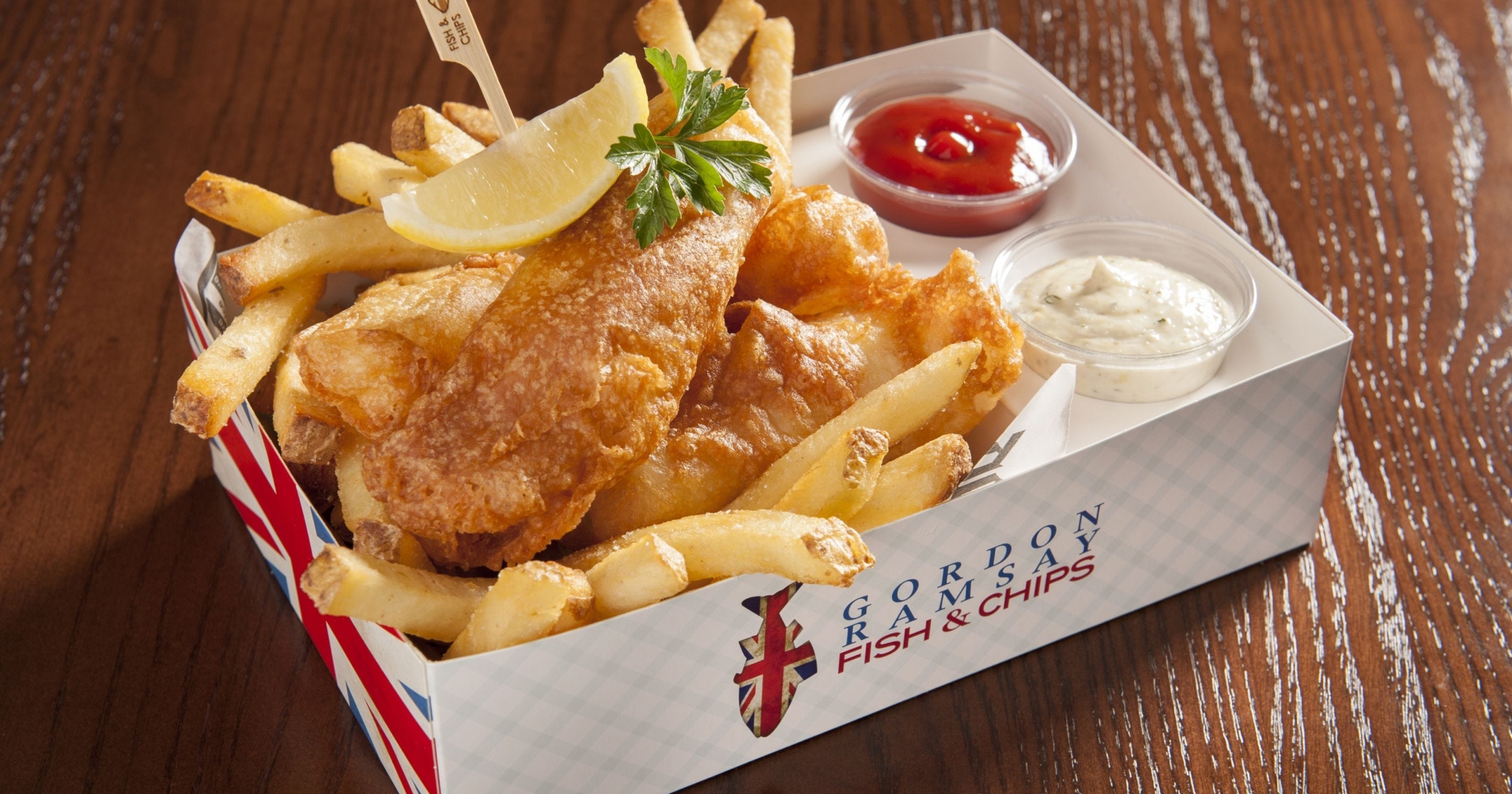 Want an affordable meal from a Michelin-starred chef? Look no further than Gordon Ramsay Fish & Chips at The LINQ Promenade.

For a delicious dessert, try the sticky toffee or Biscoff shakes for .99.

This Chinatown restaurant offers all-you-can-eat Korean barbecue. Grab some friends, sit down and cook your meats at your table. 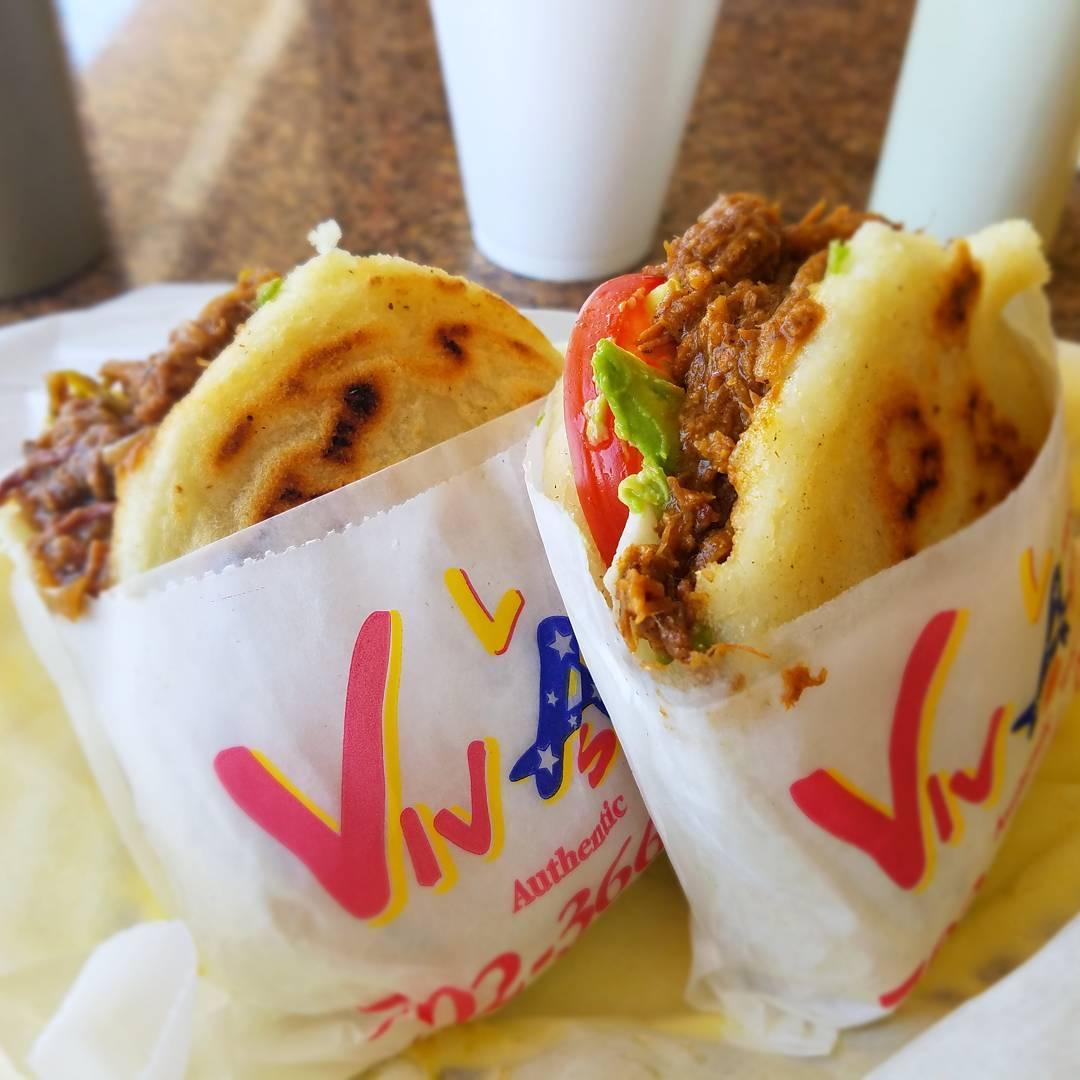 Viva Las Arepas in Downtown Las Vegas serves delicious arepas, which are basically a Venezuelan take on a taco, using a cornmeal bun stuffed with meats and cheeses.

Arepas run about - and can be filled with shredded beef, roasted pork, ham and cheese, garlic shrimp, black beans and cheese and more.

You can also order tasty empanadas with cheese or shredded chicken for .25. Sides include fried plantains and yucca root.

Evel Pie in Downtown Las Vegas is an Evel Knievel-themed restaurant with vintage pinball machines, motorcycles, framed photos, paintings and other knickknacks lining the walls from floor to ceiling. They also serve a great slice of pizza.

Stop in and grab a slice of cheese or pepperoni for .

Specialty slices are also available for .50. Specialty pizzas include the Gang Green with basil, pesto and mozzarella; the World Famous Snake River Special with rattlesnake sausage, onions and peppers; and the Hog Heaven with barbecue sauce, pulled pork and candied bacon.

Ellis Island Hotel, Casino and Brewery has been offering great values to tourists and locals alike since 1968.

The family-owned property offers one of the best steak deals in town at their Village Pub & Café. For just .99, you can enjoy a 10-ounce filet-cut top sirloin steak with your choice of potato, garlic green beans and homemade soup or salad.

Another restaurant on property, Ellis Island BBQ, also features a great dining deal – a full rack of baby back ribs for .99 that includes root beer barbecue baked beans, corn on the cob, coleslaw and garlic bread. 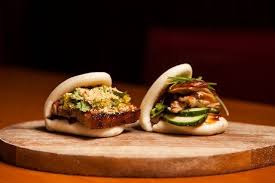 Fat Choy, inside the Eureka Casino, describes itself as a 1960s diner mashed up with a Chinese restaurant. The restaurant serves bao buns, burgers, dumplings, chicken wings, rice bowls and more from chef Sheridan Su.

Inexpensive favorites on the menu include pork belly bao for .50 and Peking duck bao for .99. All menu items are under , including short rib grilled cheese, sesame noodles, a cheesesteak sandwich and the Fat Choy burger with short rib, bacon, fried egg, cheddar and onion jam.

The Goodwich started out as a small kiosk in the parking lot of Dino’s bar and now has its own storefront downtown. It was founded by two friends who created the sandwich concept based on the foundation of flavor, texture and balance.

Sandwiches are and include chips or pickles. Choose from hot sandwiches like a Cuban, falafel with kale slaw and cucumber, or a Reuben with fennel kraut.

Cold sandwiches include classics like egg salad and ham and cheese, as well as the Cold Brown with roast turkey, bacon, tomato and gruyѐre fondue.

Hatsumi serves Japanese robata-style cuisine inside Ferguson’s Downtown, a former motel that has been converted into shops and restaurants.

There are also a wide variety of skewers ranging from – including American Kobe skirt, quail, chicken breast, lamb chop and chicken meatball. 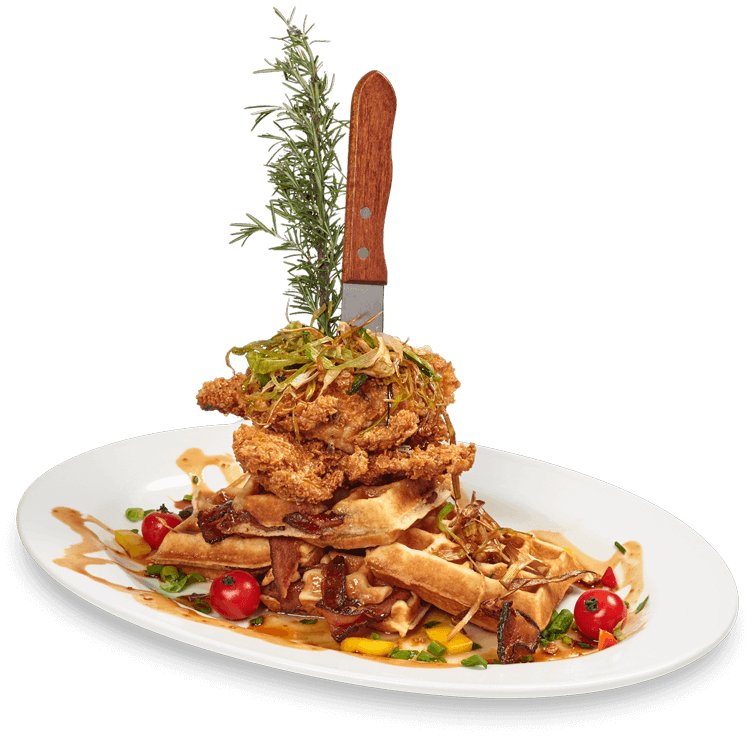 Hash House A Go Go offers several locations around Las Vegas and is known for its huge portions of “twisted farm food.”

Breakfast and brunch items are popular here. Start with one of Hash House’s giant orders of twisted flapjacks in flavors like Snickers, cinnamon roll or brown sugar banana for .99. Still hungry? Try the Tractor Driver combo with a buttermilk flapjack, two eggs, and a choice of bacon, sausage, turkey patties or potato for .99.

One of the signatures on the menu is Andy’s Sage Fried Chicken & Waffles with two sage fried chicken breasts atop a hickory smoked bacon waffle tower for .99.

Want to save a few extra bucks? Many of these dishes are big enough to share. 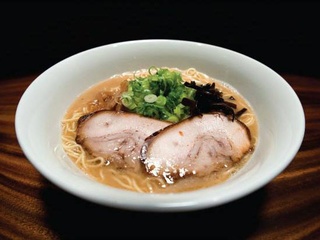 For an affordable bowl of ramen, head to Monta Ramen in Chinatown. The restaurant serves Kurume style tonkotsu ramen – broth made from pork bones, thin noodles and soy sauce imported from Japan.

Tonkotsu ramen and shoyu ramen (with chicken broth) both run .95 for a bowl. Other choices include miso ramen for .25 and Kuro ramen with black garlic oil for .95.

You can also get cold noodles with no soup for .95 and side dishes like kimchi fried rice for .95.

Tacos & Beer serves a wide array of tasty tacos for under each.

Come during happy hour from 3 – 6 p.m. and you can get select tacos for .50 as well as traditional margaritas.

Tekka Bar at the Cosmopolitan is a small walk-up sushi bar where you can indulge in hand-rolled sushi to order.

Hand rolls are all or less and include salmon, toro, yellowtail, lump blue crab and lobster.

Perhaps one of the worst-kept secrets at the Cosmopolitan is Secret Pizza, a popular spot to grab a slice or a whole pie. While there aren’t any signs for the restaurant, just follow the delicious smell and the line that forms down a non-descript hallway on the third floor.

At the walk-up counter, fresh pizza like pepperoni, cheese and veggie is offered by the slice. You can get a slice of cheese pizza for .50 and additional toppings are 50 cents.

Top off your pizza with Parmesan cheese, cherry pepper and oregano in old-fashioned spice shakers. 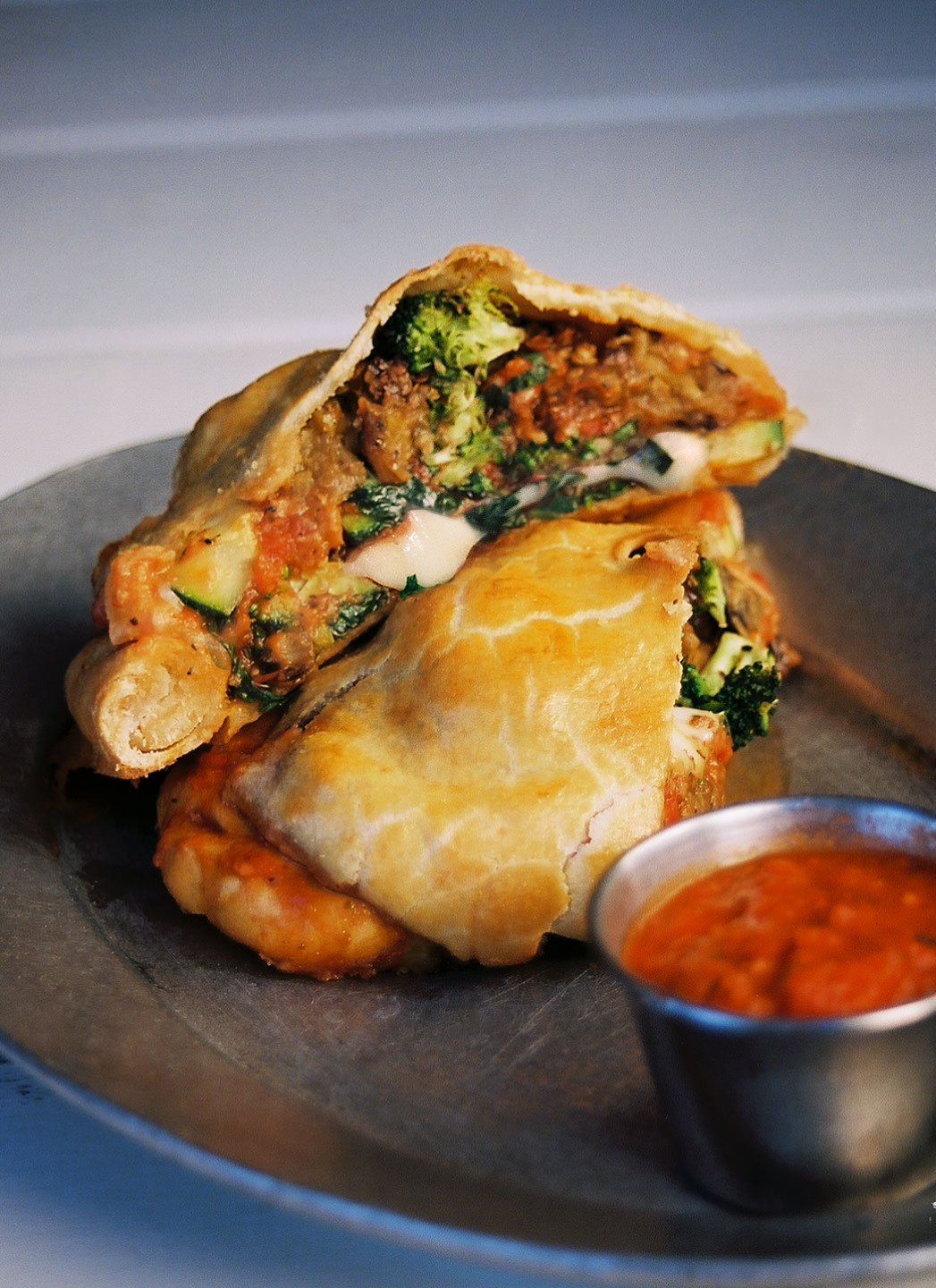 The Cornish pasty is a baked meat pie that originates from Cornwall, England and can be traced back as far as the 1200s. Traditionally, pasties were made with different fillings at each end. One end containing meat and vegetables and one end with a sweet filling. Today, Cornish pasties are filled with just about anything you can think of.

Signature pasties include The Oggie, the traditional pasty made with steak, potato, onion and rutabaga with red wine gravy or ketchup for . The Bangers and Mash pasty is with pork and sage sausage, mashed potatoes and grilled onion. The Royale with Cheese is .50 and is filled with hamburger, French fries, grilled onion, bacon, mushrooms and cheese.

Premium pastes are all under and include choices like lamb vindaloo, peppered steak and Guinness stew. There are also vegetarian and vegan options available.

The hickory smoked ribs, chicken, hot links, brisket and pork are served up in sandwiches, salads, wraps and on plates with sides.

Sandwich combos come with a side and a drink and include pulled pork for .99, a hot link sandwich for .99 and a catfish or shrimp po-boy for .99.