21 of the Best Off-Strip Restaurants in Las Vegas

21 of the Best Off-Strip Restaurants in Las Vegas

Las Vegas has become known worldwide as a dining hot spot. Hotels are filled with every type of restaurant imaginable from gourmet to buffet. We’ve got celebrity chefs and Michelin-starred cuisine.

We’ve also got a thriving local culinary scene beyond the famous Las Vegas Strip. Many chefs and restaurant operators who have trained at and worked at these Strip restaurants are opening their own places in the city. It’s worth venturing off-Strip to see where the locals and savvy foodies dine.

Here are 21 off-Strip restaurants you must visit in Las Vegas. 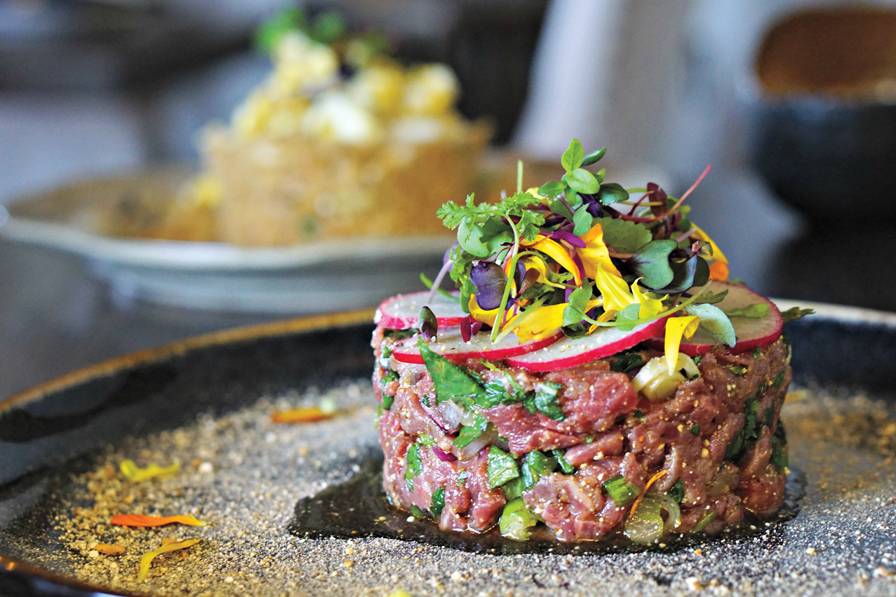 Bank Atcharawan was the former sommelier at acclaimed Thai restaurant Lotus of Siam before striking out on his own restaurant adventures.

His latest offering is Lamaii, which offers modern Thai cuisine and a great wine collection focusing on Riesling, Champagne and Chablis to pair with it.

Save room for desserts including classic honey toast and egg yolk ice cream.

Chef James Trees of Esther’s Kitchen has been named a 2020 finalist for the prestigious James Beard Foundation’s “Best Chef in the Southwest” award, chosen by judges across the country.

After one meal here, you’ll know why.

Trees was born and raised in Las Vegas. As a young chef, he worked for Michael Mina at Aqua at the Bellagio. After one year at the restaurant he was promoted to sous chef at the age of 21, becoming the youngest sous chef ever to work at the hotel.

Trees also worked with chef Gordon Ramsay and on both “Kitchen Nightmares” and “Hell’s Kitchen.”

He decided to return home to Las Vegas and open his own place, Esther’s Kitchen, which serves his unique style of elegant Italian comfort food in Downtown Las Vegas.

A must-do is to start your meal with the house-made sourdough bread served with cultured butter and olive oil.

You can also pair the bread with an incredibly tasty anchovy garlic butter.

A popular appetizer at Esther’s is the lightly breaded and crispy cauliflower tossed with anchovy, chili, garlic and capers.

Carson Kitchen opened in Downtown Las Vegas in 2014, a partnership between chef and restaurateur Cory Harwell and his friend, the late chef Kerry Simon. The restaurant, located in the repurposed mid-century John. E. Carson Hotel, features a bar, open kitchen counter, community tables, and an outdoor rooftop and bar.

Partage means to share in French and at this fine French restaurant in Chinatown the chefs share their daily creations through their tasting menus of three, five, seven or eight courses. There’s also an à la carte menu with small plates and a few larger dishes to share.

Partage, which opened in 2018, is the partnership of chef Yuri Szarzewski, pastry chef Vincent Pellerin and manager Nicolas Kalpokdjian who came to the United States after working in acclaimed restaurants in France.

Dishes to share include an 18-ounce ribeye with mushrooms and Normandy sauce and a whole fish served with grilled parsnip, parsnip puree, kumquat foam and orange blossom sabayon.

Pork secreto Iberico is cooked tableside and deglazed with shoyu sauce aged in a whisky barrel and served with apple and celery tatin pie.

Spanish chef Oscar Amador Edo had the opportunity to stage at El Bulli and El Racó de Can Fabes, which are both Three Michelin Star restaurants in Spain. He went on to operate his own restaurants for over a decade before moving to Las Vegas, where he cooked at Le Cirque for six months before launching EDO Tapas & Wine in 2018.

EDO serves classic Spanish tapas recipes with a modern twist. Diners can indulge in the regular menu, a happy hour menu or a chef’s tasting menu.

The menu features a selection of oysters, Iberico hams and cheeses to start out with. There’s a large variety of hot tapas dishes including croquetas, potatoes brava and crab squash blossoms, as well as cold tapas like Peruvian baby scallops and smoked salmon crostinis.

Chef Khai Vu serves up traditional Vietnamese cuisine and modern takes on pho at District One Kitchen & Bar in Chinatown.

The restaurant is most popular for its pho. Varieties include oxtail pho and big bone soup with bone marrow. The signature dish is the lobster pho, which includes a full 1.5-pound Maine lobster in each bowl of soup.

DW Bistro in southwest Las Vegas has been a popular locals spot for more than seven years, known for its bold mix of Jamaican and New Mexican cuisine.

Start out your meal with jerk chicken wings, lamb meatballs or crispy plantains. 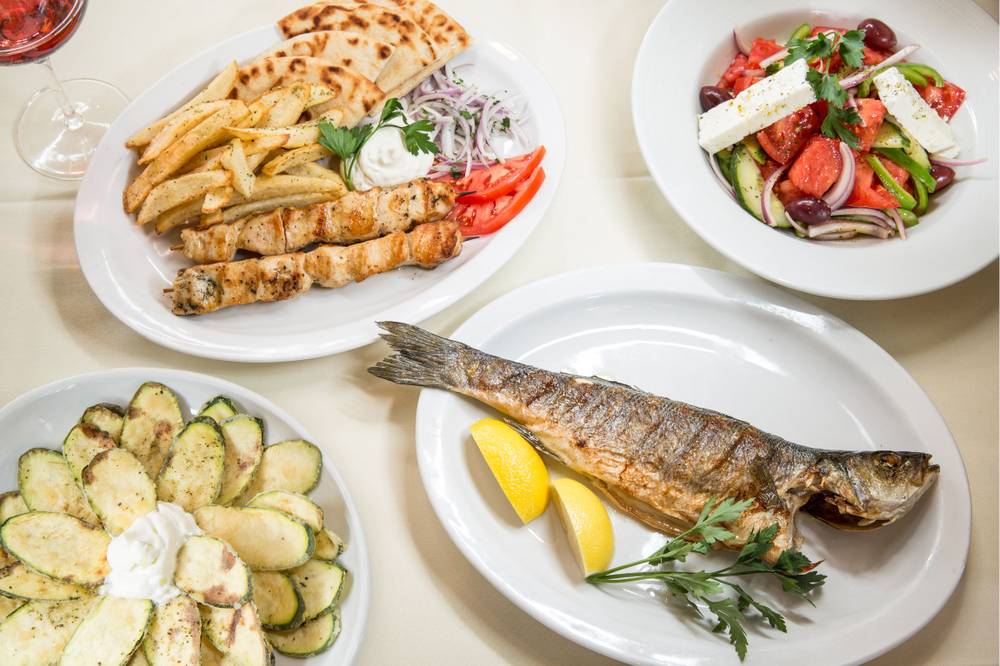 If you want fresh, authentic Greek food, head to Elia Authentic Greek Taverna and you’ll feel like you’re on the streets of Athens.

Meat lovers can indulge in traditional pork gyros, lamb souvlaki and a petite filet served with asparagus and roasted potatoes. 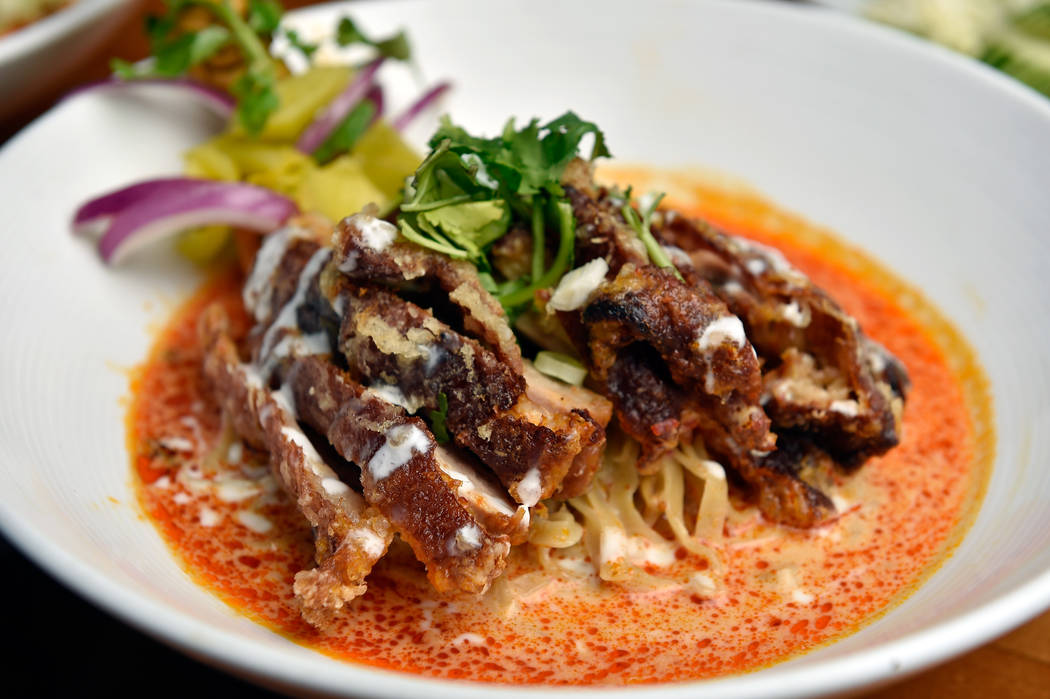 Lotus of Siam is one of Las Vegas’ most famous off-Strip restaurants. Owner and chef Saipin Chutima has been operating the restaurant with her husband since 1999. The chef’s distinct Northern-style of Thai cooking has been passed down from many generations and earned her the James Beard Award for Best Chef in the Southwest in 2011.

Guests can dine on recipes from over 100 years in the Chutima family and pair them with an extensive wine list at Lotus of Siam’s two locations.

The most famous dish at Lotus of Siam is the garlic prawns – deep fried prawns with shells on sautéed with special garlic sauce and topped with black pepper.

Chef Brian Howard has been working in the restaurant business in Las Vegas for 20 years, working his way through some of the top Strip restaurants before going out on his own.

He formed Brian Howard Hospitality in 2016 and now serves as chef and owner of Sparrow + Wolf, a restaurant that has earned national acclaim.

The menu features twists on American cuisine with signature and rotating items.

Chef Dan Krohmer from Other Mama, a highly successful Las Vegas restaurant, has opened his latest concept, Hatsumi, at Ferguson’s Downtown – a former hotel that has been converted into shops and restaurants.

Bobby Silva, who has worked at some of the Strip’s top restaurants, is Chef de Cuisine.

Hatsumi is a Japanese robata-style restaurant with a yakitori bar and a full bar with cocktails including an extensive sake program.

Start out with sashimi or a variety of skewers with chicken, beef, shrimp or lamb. 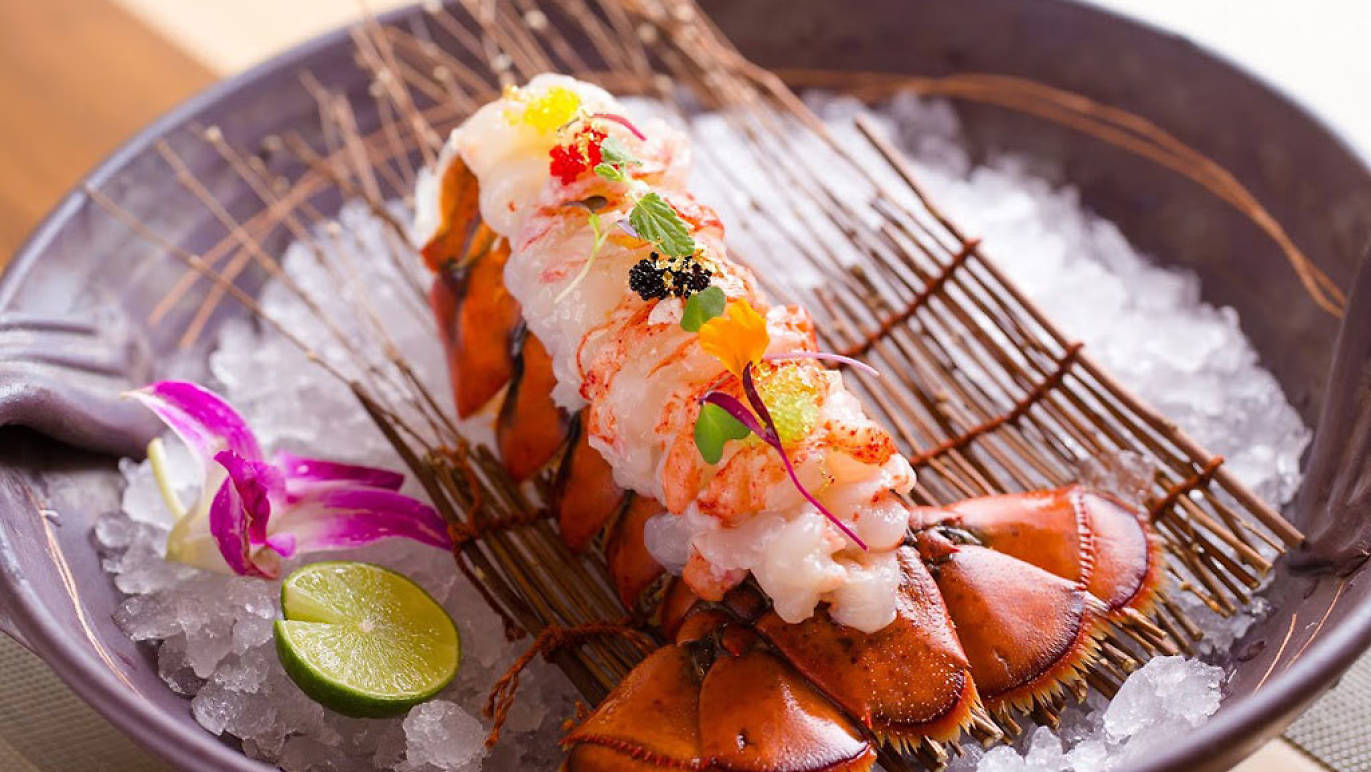 Sushi Kame is a high-end Japanese restaurant in Chinatown that offers kaiseki and omakase dining experiences. The multi-course meals need to be reserved two weeks in advance. Chefs Eric Kim, Hideki Tsujimoto and Masaru Matsuura create the ever-changing menus and tailor the experiences to the guests.

The Tenorio, Ramirez and Puchi families opened the first Bajamar Seafood and Tacos in Las Vegas in 2017 and now have a second location in town. The restaurant is known for its welcoming, family vibe and its Baja-style seafood.

Chef Gina Marinelli was inspired by her travel through various regions of Italy to offer Italian cooking with a coastal feel at La Strega. The Summerlin restaurant serves handmade pasta dishes, pizzas and an expertly curated wine list.

Oyster Bar at local casino Palace Station has been a wildly popular hidden gem for years.

The restaurant is open 24 hours and serves some of the area’s freshest seafood selections from steamed clams to oysters, chowders, seafood pastas, gumbo and more.

The live action kitchen means dishes are prepared right in front of you and everything is cooked to order.

Of course, oysters are the main attraction here and they are available for just from 5 a.m. – 10 a.m.

Other dishes include cioppino -a hearty stew with shrimp, crab, cod, mussels and clams – and bouillabaisse shellfish stew.

Las Vegas is nicknamed the “Ninth Island” for its large population of Hawaiians and there are some great local Hawaiian restaurants in town,including Island Flavor from chef Darcy Ambrosio. The restaurant combines the best of Hawaiian and Western influences.

Breakfast is available all day and you’ll want to try a Hawaiian classic – the Chef’s Loco Moco, made with a certified Angus beef burger, mushroom and onion brown gravy, Spam, Portuguese sausage and three eggs.

There’s also a menu of favorites that are served with two scoops of rice and a scoop of mac salad. Favorites include teriyaki chicken, Kalbi short ribs, Kalua pork and cabbage and Hawaiian pork roast with slow cooked pork, Hawaiian salt, cracked pepper and brown gravy. 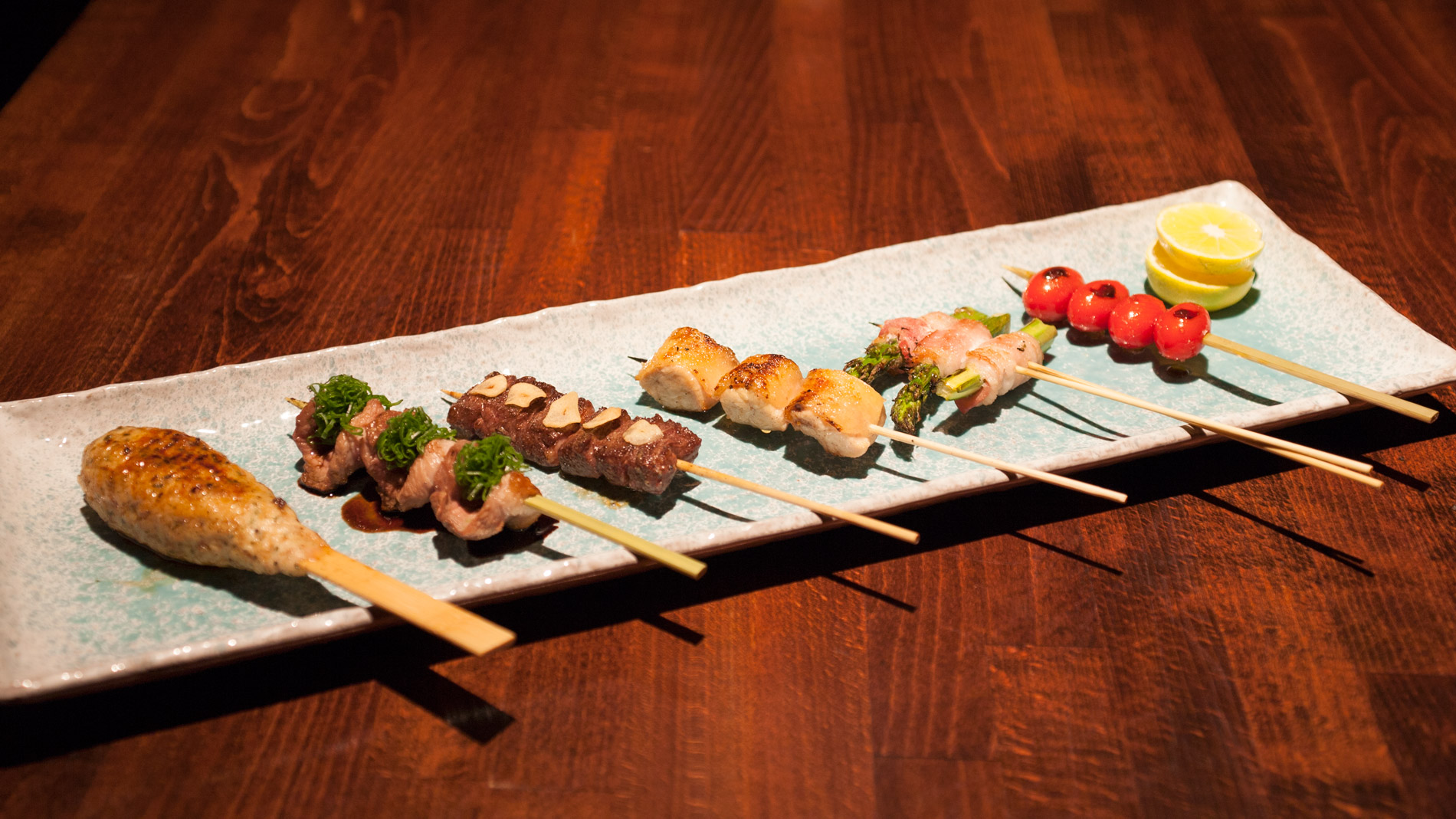 Raku restaurant from chef Mitsuo Endo has earned a reputation for being one of the best restaurants in Las Vegas. Endo was a semi-finalist in both 2014 and 2015 for the James Beard Best Chef in the Southwest award.

Raku cooks dishes on an authentic binchotan grill imported from Japan. The restaurant also prides itself on using the best ingredients like Kobe Beef from Oregon, free-range organic chicken from California, Kurobuta Pork from Iowa, fish air-shipped from Japan and condiments imported from Japan.

Vintner Grill is a popular neighborhood American bistro in Summerlin with dishes that infuse flavors from Spain, France and Italy.

Meraki Greek Grill is a casual spot to get delicious authentic Greek favorites.

Start out with a variety of spreads served with pita bread including hummus and roasted eggplant. Greek favorites include stuffed grape leaves, traditional chicken soup with rice and lemon and spanakopita.

Be sure to indulge in baklava, authentic Greek yogurt and baklava ice cream for dessert. 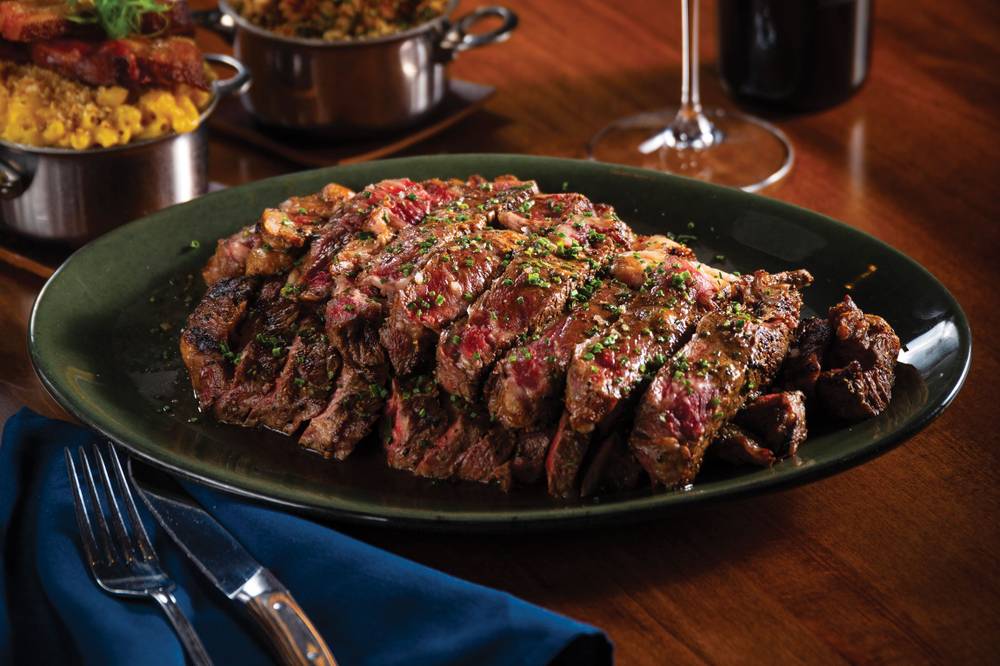 Cleaver is a steak and seafood restaurant from Nectaly Mendoza, the creator of the popular local hangout, Herbs & Rye.

The menu specializes in butchered meats, seafood and classic cocktails in a sophisticated man cave-like atmosphere.

Appetizers include steak tartare and foie gras served on a sweet potato pancake with blackberry reduction. There’s also a raw bar with oysters and a seafood platter.

The Cleaver Favorites section of the menu includes squid ink pasta and seared sea bass () served with pea and mint risotto. Steaks are a highlight here, including a 16-ounce ribeye and a mammoth 120-ounce Cleaver ribeye that serves five to eight people.

The food here features Spanish and Latin inspiration with a touch of Japanese flair. Small bites complement the array of wines, sake and sangrias.