The 20 Best Restaurants in Las Vegas

We at Lip Smacking Tours take great pride in knowing the hottest hotspots throughout Las Vegas. When we tell guests that we can bring them to the most popular restaurants in the city – right past long lines and into their own VIP dining room – it’s because we’ve spent years networking throughout the city, visiting these amazing locations, and learning what makes for the perfect Las Vegas dining experience.

When we tell you that we’ve curated a list of the 20 best restaurants in Las Vegas helmed by the city’s most talented chefs, you can trust in that.

The 20 Best Restaurants in Las Vegas

Whether you’re a local looking to mix things up a bit or a visitor who wants to know where to go to please your palate, this list of Las Vegas hotspots is the only one you’ll ever need: 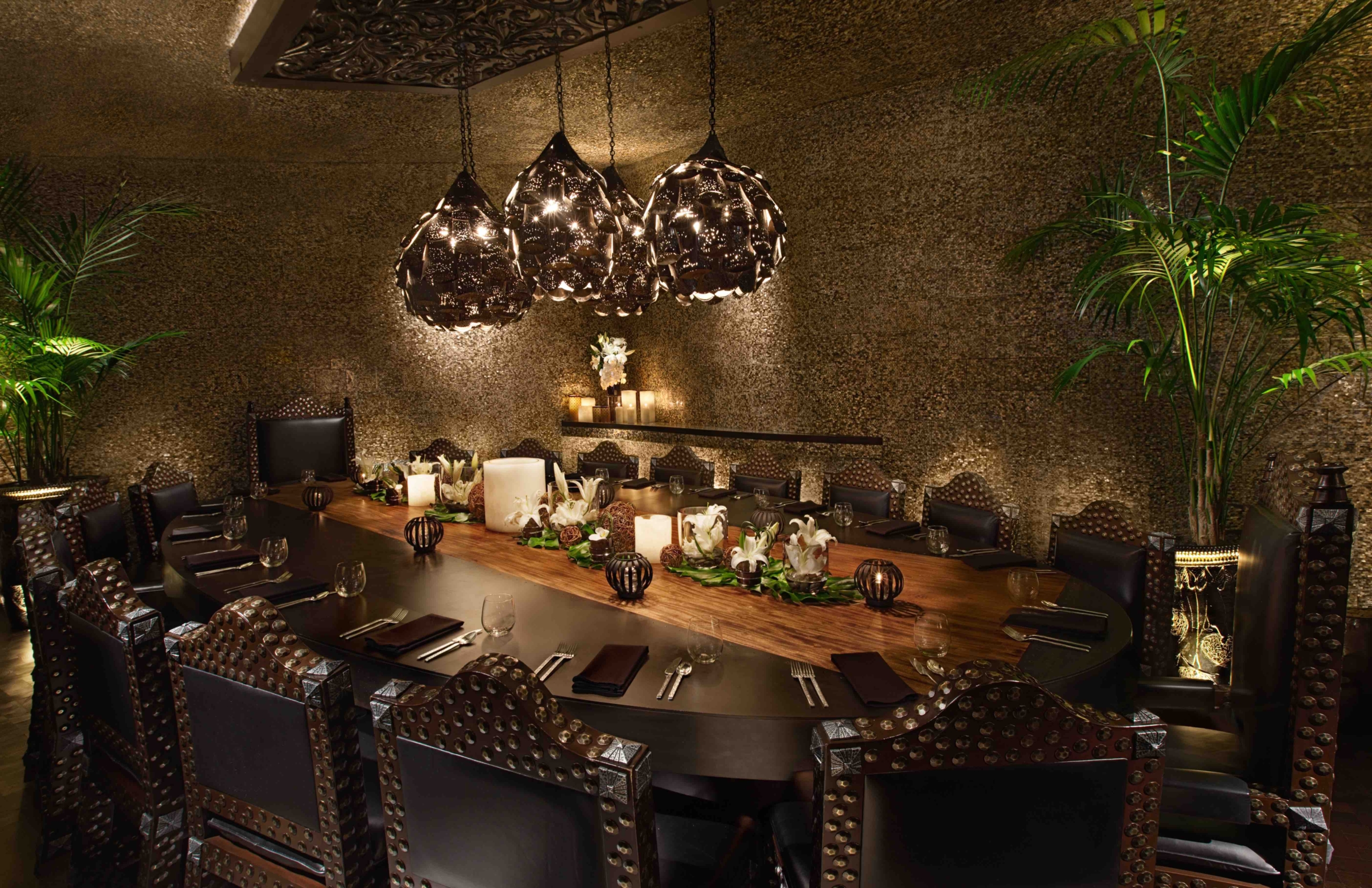 Chef Javier Sosa is famed in the United States and Mexico for his stellar high-end restaurants.

Thankfully, he had the foresight to launch one in Las Vegas, too. Javier’s is everything you could ever want in a fine-dining experience spotlighting Mexican cuisine. Along with an arresting menu that’s packed with authentic flavors, Javier’s boasts a luxurious yet relaxed vibe sure to make guests feel right at home.

Between the artful presentations, the potent hand-shaken margaritas, and the dramatic wooden wall sculpture depicting an Aztec-inspired scene, Javier’s awakens all the senses.

Few cities in the United States offer the breadth of regional Italian cuisine that Las Vegas does. Since the 1940s, it’s served outstanding pastas, pizzas, and other Italian specialties worth making a special trip for.

Cipriani is one of the latest Italian restaurants to command attention. Opened two years ago in the Wynn Las Vegas, this high-end restaurant features signature Venetian dishes such as baked tagliolini with ham, hand-made pizzas, and of course, its famed carpaccio alla Cipriani.

With its 80-foot pergola tunnel covered in a kaleidoscope of colorful blooms and twinkling lights, Catch greets visitors in a spectacular way. It’s no wonder then that this unique entryway provides this restaurant with one of the most breathtaking decors in Vegas. The atmosphere gets even livelier with the restaurant’s talented roster of DJs.

The menu is equally entrancing, offering the best seafood and steaks prepared with bold Asian flavors.

Even with the city’s plethora of impressive fine-dining establishments, Le Cirque continues to stand out for its exquisite French fare that is served up with plenty of Sin City flair. The restaurant’s décor is a celebration of color that culminates with a silk-tented ceiling done up in every shade of the rainbow.

The exquisite tasting menu allows patrons to pair any dish with more than 900 wine selections. In particular, don’t miss the Maryland blue crab or hamachi.

Buffets were once all-you-can-eat troughs of mundane food. No longer. With the onset of celebrity chefs and their splashy restaurants, buffets have gone boffo. They now feature the best ingredients in elaborate spreads fit for a king.

Enjoy more than 500 dishes, along with 9 different show kitchens with food made to order, set in an upscale venue. Whatever you crave, you’re sure to find it at Bacchanal Buffet.

Brunch was once an after-thought in Vegas. But these days, it’s a huge draw with some of the best chefs in town now flexing their skills during this festive daytime repast.

Bardot Brasserie stands apart for its spread of French specialties, including a spectacular raw bar. Overseen by San Francisco Chef Michael Mina, this brunch spot is ideally located within walking distance of the Eiffel Tower. Settle in and feel as if you’re dining at a real Parisian café on the Left Bank.

Vegas may have its inexpensive shrimp cocktails and other bargain noshes. But hands down, the best deal in town is found at Estiatorio Milos. For only , diners can enjoy a three-course lunch prepared with unbelievable skill and finesse.

The fact that it comes with a breathtaking view from The Cosmopolitan’s enclosed terrace is just an added bonus.

If visitors can tear their eyes from the slots or poker hands, the best view in the city can be found at SkyBar. Take the elevator to the 23rd floor of the Waldorf Astoria to discover this glamorous bar and lounge with floor-to-ceiling windows offering an unparalleled 360-degree view of the Strip.

Take it all in while sipping an imaginative cocktail prepared by some of the top mixologists in the city.

Psst, we’ll reveal the city’s best hidden gem. But it’s just between us, OK? Truth be told, this is a favorite locals’ hangout not readily known by tourists. Residents have lived here long enough to know that Jammyland is where it’s at. This downtown spot features fun Jamaican music and food, housed inside a sprawling warehouse-like space that also has a lovely patio decorated with strings of lights.

Unwind after a long day with jerk wings, Jamaican patties, or smoke-braised oxtail, and a cocktail.

Chef Oscar Amador’s Spanish restaurant, EDO Gastro Tapas and Wine, is not only notable for its Barcelona tapas, but its convivial atmosphere.

It’s brings alive a taste of Spain in Vegas, earning it our “Best Hospitality in Las Vegas” honor. You feel at ease from the get-go with its friendly, attentive staff serving up small plates and glasses of sangria with warmth and care.

There are steakhouses. And then there is Bazaar Meat by José Andrés, which is in a class all its own.

As Andrés once famously said, “I will eat whatever makes me feel like a lion.” He proves this with a menu that features the most meticulously sourced premier meats from around the world that are cooked over live fire. This is a steakhouse that sets the bar for all others. 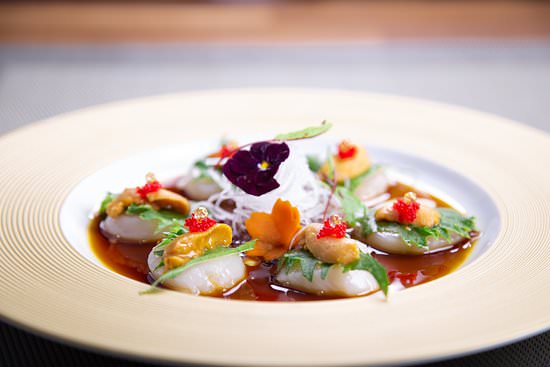 Sushi may abound in Vegas, but some of the very best can be found at Sushi Kame. Chef-Owner Eric Kim has created a dazzling array of la carte options that include traditional and one-of-a-kind creations. However, many guests prefer to put their trust in the chef, opting for an hours-long omakase or kaiseki menu made up of the finest seafood and ingredients available that day, including some flown in directly from Japan.

Wolfgang Puck was one of the first world-class chefs to open a restaurant in Vegas in the 1990s. Since then, he’s only burnished his reputation further. His Spago remains one of the hottest tickets in town for its elegant, seasonal California cuisine.

Its new location, overlooking the dramatic Bellagio fountains, only gives it more cache. Come for the smoked salmon pizza crowned with caviar, the dish that cemented Puck as one of the most genius chefs of our time. 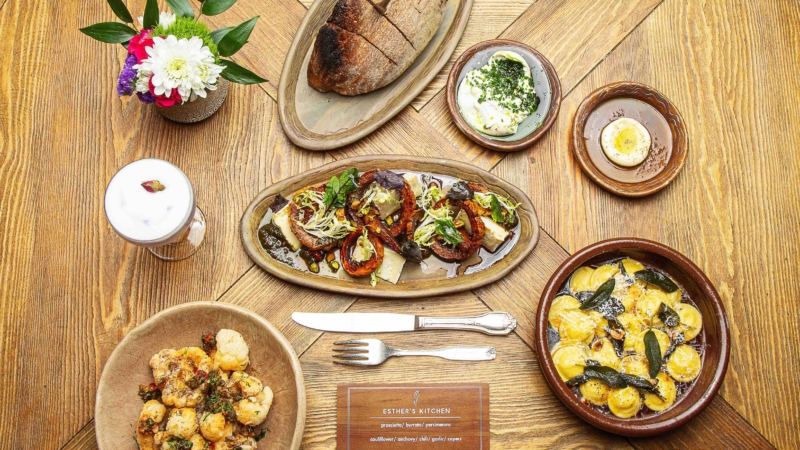 Esther’s Kitchen proudly scratch-makes all its pastas and pizzas by hand. It’s food that never ceases to satisfy and delight.

Hands down, Mr. Chow offers the best Happy Hour in Las Vegas. First of all, there’s the luxe vibe, characterized by a private-elevator entrance that makes patrons feel extra special the moment they arrive. Second, there’s the killer view of the captivating Garden of the Gods Pool Oasis.

Lastly, there’s the bargain-priced Happy Hour offerings, which includes Beijing specialty appetizers for only and all drinks for half off. Feel like a high-roller, even if you’re on a budget.

Get away from the crowds to sip a sophisticated cocktail in a secretive spot that makes you feel as if Prohibition-era coppers are about to bust in any moment. But of course, they won’t. So, just relax completely, and make it a double.

There’s something about kicking back with a cocktail in a clandestine location that makes it taste even better.

Downtown Cocktail Room delivers on that with its trick door that provides access to the best cocktails in Las Vegas. Dim lighting and a lounge-y atmosphere set the mood for an impressive list of cocktails, both classics and originals made with top-shelf spirits and fresh, seasonal ingredients.

For years, Lotus of Siam has lured gourmands off the Strip. Its reputation has only continued to spread far and wide. It remains a must-stop for any foodie craving unadulterated and thoroughly authentic Thai cuisine.

It’s not only considered the top Thai restaurant in Vegas, but arguably one of the best in the entire United States.

Downtown Las Vegas is increasingly giving The Strip a run for its money in terms of top-caliber restaurants. Case in point is our choice for the best restaurant in downtown Las Vegas, Carson Kitchen. Founded by the late-great celebrity chef, Kerry Simon, Carson Kitchen makes you feel at home immediately, especially because its cool industrial vibe accented with exposed beams and pipes was actually inspired by Simon’s own loft-style home. What’s more, the restaurant occupies what was once a mid-century motel, giving it an even greater sense of nostalgia.

As befitting such a sentimental space, the menu concentrates on generous portions of comfort food reimagined. Savor crisp chicken skins, bacon jam and Havarti with toasted baguettes; cocoa-espresso rubbed NY strip; and a golden-crusted pork schnitzel. All of it can be enjoyed either in the dining room, courtyard or rooftop. There are times for dressing to the nines. And there are times when you just want to come as you are. For those moments, head to our choice for the best casual restaurant in Las Vegas, Meráki Greek Grill.

Get your fill of falafels, gyros and baklava at this counter-service Greek-Mediterranean café. If you come with a group of four, be sure to indulge in one of two different “feasts,’’ a plentiful family-style spread of Greek specialties sure to satiate any appetite.

Looking to Enjoy the Best That Las Vegas Has to Offer?
Ready to indulge in some of the award-winning cuisine highlighted in our 2019 awards?

Then, hit us up at Lip Smacking Tours. We’ll take you on a delectable excursion to three world-famous Las Vegas restaurants – past long lines and right to your own private dining room, complete with VIP service.

Contact us today to enjoy the best dishes that Vegas has to offer in one smooth, efficient, and thoroughly entertaining outing.