Where to Find the Absolute Best Desserts in Las Vegas

Whether you want to play games with your friends all night or just sit back and let others handle the entertainment, this incredible city is full of options.

Of course, when you were a kid, nothing compared to an amazing dessert. Back then, that might’ve just been an ice cream sundae or a piece of chocolate cake.

Nowadays, your inner child doesn’t need to settle for the basics.

The best desserts in Las Vegas are just as opulent as any of the casinos and as enjoyable as any show.

So, while you might lose at the gambling tables, you’ll feel like a winner when you leave any of the dining tables at these 18 dessert places in Vegas. 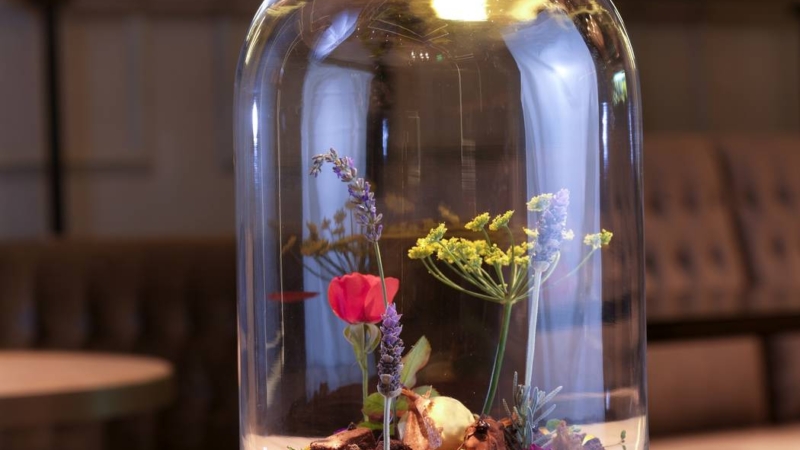 You’ll immediately understand why when you lay eyes on its one-of-a-kind Chocolate Terrarium. It is literally a terrarium – complete with glass cover – that is 100% edible. The gorgeous dessert is made with chocolate “soil,” chocolate pudding, puffed wild rice, buttermilk cake, hazelnut ice cream, and a crispy chocolate tuile.

There are a lot of reasons why it’s worth visiting Sage at ARIA, especially if you have a sweet tooth. Chef Shawn McClain has a reputation combining innovation and refinement, an ability that is on full display with his incredible Foie Gras Candy Bar.

This is a far cry from the kind you find at your grocery store’s checkout line. McClain’s is made with salt-and-pepper peanut-butter ice cream, single-origin milk chocolate, bourbon caramel, and of course, luxurious foie gras. No one will blame you for ordering two (or three).

3. Craftsteak for the Cinnamon Monkey Bread

Among other things, Craftsteak is known for its warm, welcoming ambiance. That will put you in the perfect mood to settle in and enjoy its unbelievable Cinnamon Monkey Bread. This decadent dessert is made with tender cinnamon brioche and vanilla bean ice cream. It’s then topped with a generous amount of sweet toffee sauce. 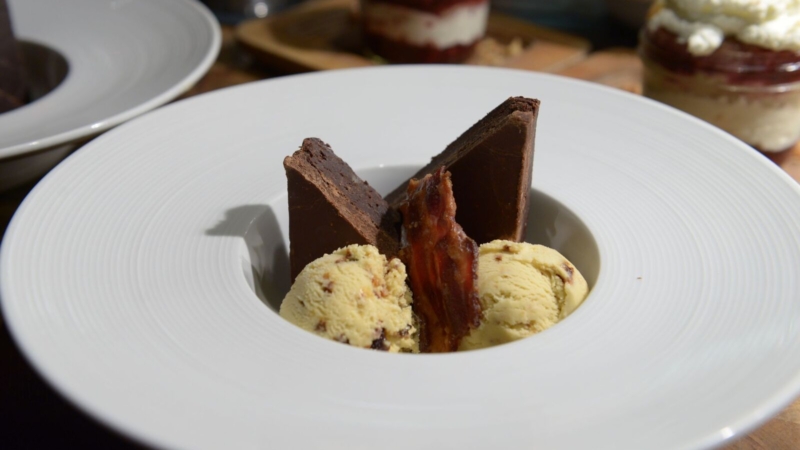 Chef Kerry Simon adored taking beloved childhood treats and turning them into mouthwatering desserts for adults. Some of his more memorable ones included Rice Krispy bars and cotton candy.

This legacy lives on at Carson Kitchen, which still features his delectable Bourbon Fudge Brownies. You’ve never had brownies like these before. They’re about the size of your fist, and each comes with two scoops of brown-butter bacon ice cream.

Bacon, butter, and ice cream: can you think of a better combination?

For those who love sweet and salty, the best dessert in Las Vegas is waiting for you at Guy Fieri’s Vegas Kitchen & Bar where you’ll find his Cheesecake Challenge.

With this dessert, the “Mayor of Flavortown” offers up half of an entire NY-style marble cheesecake.

It’s topped with generous amounts of pretzels, potato chips, and hot fudge, too. So, each bite is crammed with sugary and salty goodness.

This includes the glamorous Cipriani, an Italian restaurant that feels more like a luxurious Mediterranean cruise ship.

Among its many delizioso menu items, is the Vanilla Ice Cream à la Minute or, as it’s known in Venice, the Gelato di Vaniglia al Momento.

There’s nothing boring about this vanilla ice cream. In fact, it could easily be the best ice cream on the Las Vegas strip.

It’s made fresh every day using three different types of sugar. It’s also kept chilled until ordered, at which point, it’s re-whipped into a satiny-sweet finish.

7. Sara’s for the Tableside Bananas Foster

Nothing says “high roller” like tableside presentations, whether you’re ordering a martini, a Caesar salad, or Chateaubriand.

When it comes to Las Vegas desserts, the king of tableside presentation is Bananas Foster, and the best place to find it is at Sara’s located inside the Palms. It’s the epitome of “dinner and a show,” made all the better by Sara’s interior that’s reminiscent of classic Las Vegas.

LAVO Italian Restaurant & Lounge is another upscale eatery that could lay claim to the best dessert on the Las Vegas Strip.

This glamorous behemoth is a meal in and of itself, so either bring friends or consider just an appetizer instead of an entrée beforehand. You won’t want to leave a single crumb behind.

9. Beauty & Essex for the Carnival Sundae

Beauty & Essex at the Cosmopolitan is known for mixing the “Lower East Side grit” of New York with the glamour of the Las Vegas Strip.

If you have a sweet tooth, Chef Chris Santos’s “Carnival” Peanut Butter-Pretzel Sundae will satisfy on every level. The peanut butter gelato is packed with chocolate chunks and covered in caramel, candy trail mix, chocolate pretzels, and potato chips. Beauty, indeed.

The celebrity chef may have gained worldwide notoriety for his biting remarks, but his famous Sticky Toffee Pudding with brown butter ice cream proves he knows how to be plenty sweet, too. Ramsay has made his version of the traditional British dessert a bit of a passion project over the years, telling one reporter:

“Every time I put a new version of my sticky toffee pudding, f*cking thing just gets better and better. I don’t know whether it’s the salted caramel or the amount of toffee that we steep inside.”

11. Scarpetta for the Salted Caramel Budino with Pretzel Toffee

As if The Cosmopolitan needed one more reason to attract throngs of guests, Scarpetta has a delicious Salted Caramel Budino with Pretzel Toffee.

A budino is an Italian version of a pudding or a custard. It’s a staple of Italian desserts, but the reason Scarpetta’s may be one of the best desserts in Las Vegas is that it begins with a layer of vanilla pudding at the bottom of a glass. Next comes the salted caramel sauce topped with a quenelle of whipped cream. Then, a sprinkle of salt is added over top.

This award-winning dessert also comes with pretzel toffee that gives the entire thing an incredible crunch.

If it wasn’t for the amazing cuisine at Mastro’s Ocean Club, it would be easy to spend an entire meal simply looking around at this restaurant’s extraordinary design.

However, when its Signature Warm Butter Cake arrives, you’ll have no problem giving it your full attention. The vanilla bean ice cream and sweet cream cheese are streaked with raspberry sauce, and then topped with orange segments and strawberries. All of this is placed on top of rich butter cake, and finished with a healthy helping of homemade whipped cream on the side.

13. Javier’s Finest Foods of Mexico for the Tres Leches

Javier’s Finest Foods of Mexico has one of the more unique additions to our list of the best Las Vegas desserts.

Its Tres Leches is a moist sponge cake that looks like a work of art. It’s made with three different types of milk for a flavor unlike any other sponge cake you’ve ever had. The almonds added to the top give each bite a bit of crunch. Finally, there’s cajeta sauce, a caramel drizzle made from goat’s milk, that’s worth every calorie.

Sake Rok takes the vibrancy of Japanese pop culture and fuels it with the fun of a Las Vegas nightclub. That’s enough to make this “high-profile social dining extravaganza” extremely popular with a diverse crowd, but an equally exciting menu doesn’t hurt, either.

The Sumo Honey Toast exemplifies why this place has developed such a large following in such a short amount of time.

Imagine brioche croutons sautéed in a pan of honey butter. That sounds amazing, right? Now, imagine those croutons tucked into a buttery tower of honey bread. That sounds even better, right? But then, imagine the tower covered with homemade custard and a large scoop of vanilla ice cream, fresh berries, and a drizzle of honey-butter.

Sure, you could order the regular portion, but spring for the Sumo Honey Toast, which is four times bigger and comes with mochi.

Some Las Vegas restaurants have names that are mysterious. You can’t immediately tell what they mean or what their menu may be like.

That’s definitely not the case with the very appropriately named Sugar Factory.

While its menu does include entrées like burgers and salads, that’s not why you visit this real-life Candy Land. It’s because most of the menu consists of Cotton Candy Cosmopolitans, Caramel Sugar Daddy Cheesecake Milkshakes, and — the most notorious of them all — The World Famous Sugar Factory King Kong Sundae.

Are you ready for this?

Even if you don’t consider it the best dessert in Las Vegas, it’s definitely the biggest.

16. Nobu for the FIJI Shave Ice

If you’re a fan of Asian food, you probably already know all about Nobu. The world-famous chef with restaurants around the globe actually has his largest locale inside Caesars Palace. It has to be that sizeable to accommodate the overwhelming demand for Nobu’s award-winning cuisine.

While the menu can make it difficult to choose, most patrons who want to end their meal with something sweet will tell you one of the best desserts in all of Las Vegas is the Nobu Style Fiji Shave Ice. Guava sorbet is covered in sweet azuki beans, berries, mochi, tofu and coconut gelee, agave basil seeds, tamarind ginseng syrup, and a lilikoi reduction.

That makes for refreshing flavors galore packed into every spoonful.

17. Herbs & Rye for the Made-to-Order Donuts

Herbs & Rye is known throughout the country for its award-winning cocktails.

However, what a lot of people don’t know is that Herbs & Rye may also have the best dessert in downtown Las Vegas. While its cocktails are often complex, its most popular dessert is surprisingly fairly simple: made-to-order donuts. These powdered beauties come with caramel and white chocolate dips on the side and, of course, plenty of options for pairing a cocktail alongside.

18. Bardot Brasserie for the Chocolate Macaron 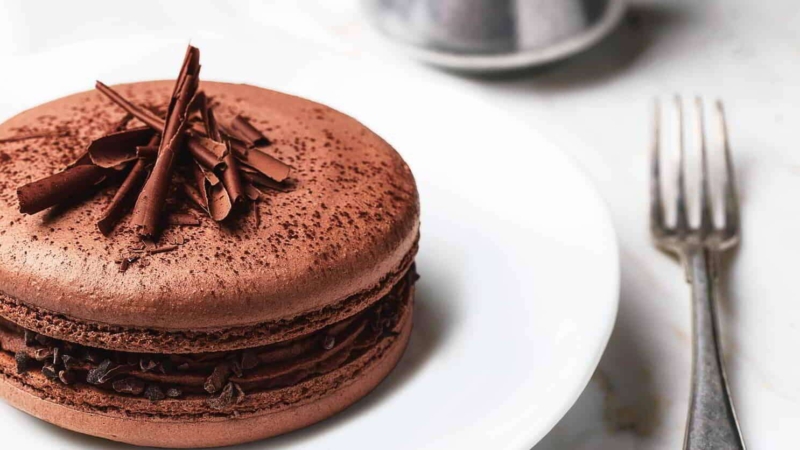 If you like macarons, you will find them in abundance in Las Vegas.

If you truly live for them, then make a reservation at Bardot Brasserie ASAP. Located inside ARIA, this French restaurant has a monster macaron on its menu that towers over typical versions.

Its Chocolate Macaron is about the size of a burger. It consists of two dark chocolate cookies, Grand Marnier, Valrhona chocolate hazelnut mousse, and candied orange.

Unlike other dainty macarons, this one is practically a meal in itself, not that anyone has ever complained.

Looking for the Best Dessert in Las Vegas?

If you have a sweet tooth, none of the restaurants we listed above will disappoint.

However, if you have multiple sweet teeth, scan the dessert menu first when visiting a new restaurant, and think everything would be better dipped in chocolate, you can’t visit just one. That would be like having merely one chocolate-chip cookie or just one scoop of triple-fudge ice cream.

Instead, really indulge by joining us for a food tour. We’ll take you to the best dessert places in Las Vegas, right past the lines, and into a private dining room where you can satisfy your love of sweets like never before.

Book your food tour with us today.