Your Guide to the Best of CityCenter Las Vegas

Experience the most metropolitan part of the Strip by visiting these can’t-miss spots.

Your Guide to the Best of CityCenter Las Vegas

Unlike most major cities, Las Vegas doesn’t have a traditional skyline. Instead, its landmarks resemble those from other destinations—the Eiffel Tower, Statue of Liberty…the list goes on. This is what makes CityCenter, the collection of gleaming buildings near Las Vegas Boulevard and Harmon Avenue, so alluring. In the midst of the more theatrical elements of the Las Vegas Strip, they appear sleek and metropolitan.

For the Las Vegas local or traveler in search of art, upscale cocktail bars, and speakeasy-style experiences, there’s no place better than CityCenter. From lounges with views that sparkle to a secret art installation, here’s where to eat, drink, and explore in and around CityCenter:

A visit to The Chandelier—Cosmopolitan’s multi-level lounge housed inside what looks like an actual chandelier—is a magical enough experience on its own. Order the Verbena cocktail and the evening becomes unforgettable. The drink comes with an edible Szechuan Button or “buzz button,” a flower that alters your taste buds and creates a tingling effect inside your mouth.

Located on the 23rd floor of the elegant, non-gaming Waldorf Astoria, SkyBar is a dimly-lit lounge where you can enjoy sweeping views of the Las Vegas Strip and craft cocktails that celebrate the city’s history. From the classic Sinatra (Jack Daniel’s Sinatra Select, Amaro Nonino, lemon, honey, pineapple, and egg white) to the modern Golden Knight (Toki Japanese whisky, chartreuse, luxardo, aperol, ginger), the menu and the floor-to-ceiling windows showcase the best of Las Vegas.

Wondering why all of those people at the Cosmopolitan are headed down an unmarked hallway at 3 a.m.? Wonder no more. They’re going to Secret Pizza, the aptly-named hidden pizza restaurant within the resort. Here you’ll find New York style pizza by the slice or by the pie. Finding the entrance is half the fun.

A bucket-list culinary destination for foodies, é by José Andrés only offers two seatings per night Wednesday through Saturday. Located at the Cosmopolitan near Jaleo (another José Andrés restaurant), é features a tasting menu of Spanish cuisine marked by visual flair. Heads up: Reservations for this experience (0 per person) go fast. 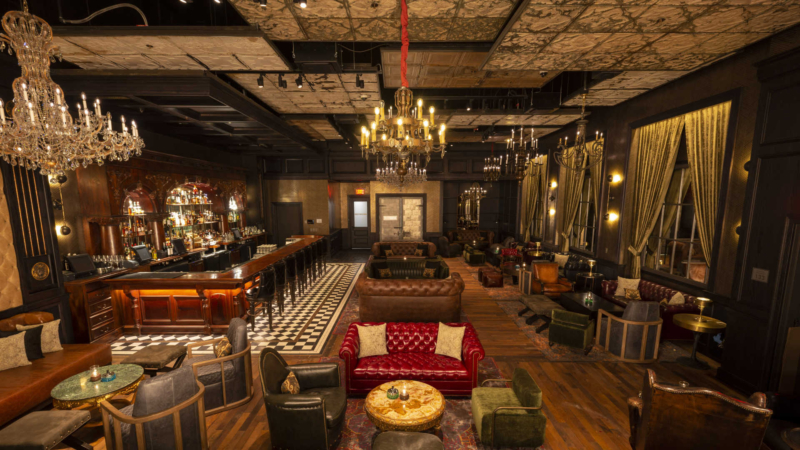 One of the latest takes on the speakeasy trend is The Barbershop, an actual working barbershop with a secret cocktail lounge at the Cosmopolitan. Pop in for a quick beard trim and then head to the back for live music and an impressive whiskey list. 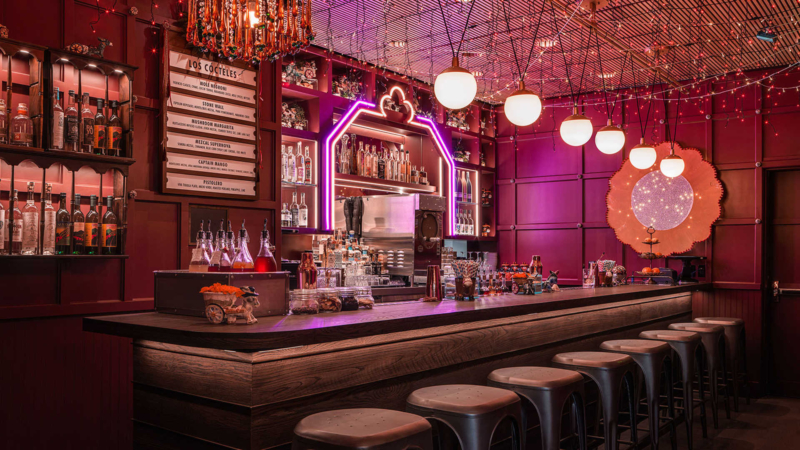 Find the green door with the festive donkey illustration on it and begin your night at Ghost Donkey, an intimate mezcal and tequila bar at the Cosmopolitan. The space is outfitted with string lights and neon—and it’s also home to some fancy truffle cheddar nachos that pair perfectly with a mezcal negroni or two.

Fans of James Turrell may be surprised to learn that the California-based artist has a light installation here in Las Vegas—above the Louis Vuitton store at Crystals no less. The ethereal installation, Akhob, is free to visit, but you’ll need to make a reservation by phone well in advance.

Make your way past the blackjack tables and upscale restaurants at the Bellagio and you’ll find something unexpected on the Strip: a 14,000-square-foot garden beneath a glass dome ceiling. This is the Bellagio Conservatory, a free, seasonally-rotating display of flowers, waterfalls, and music that’s open to the public. Visit early in the morning to see the resort’s horticulture staff at work.